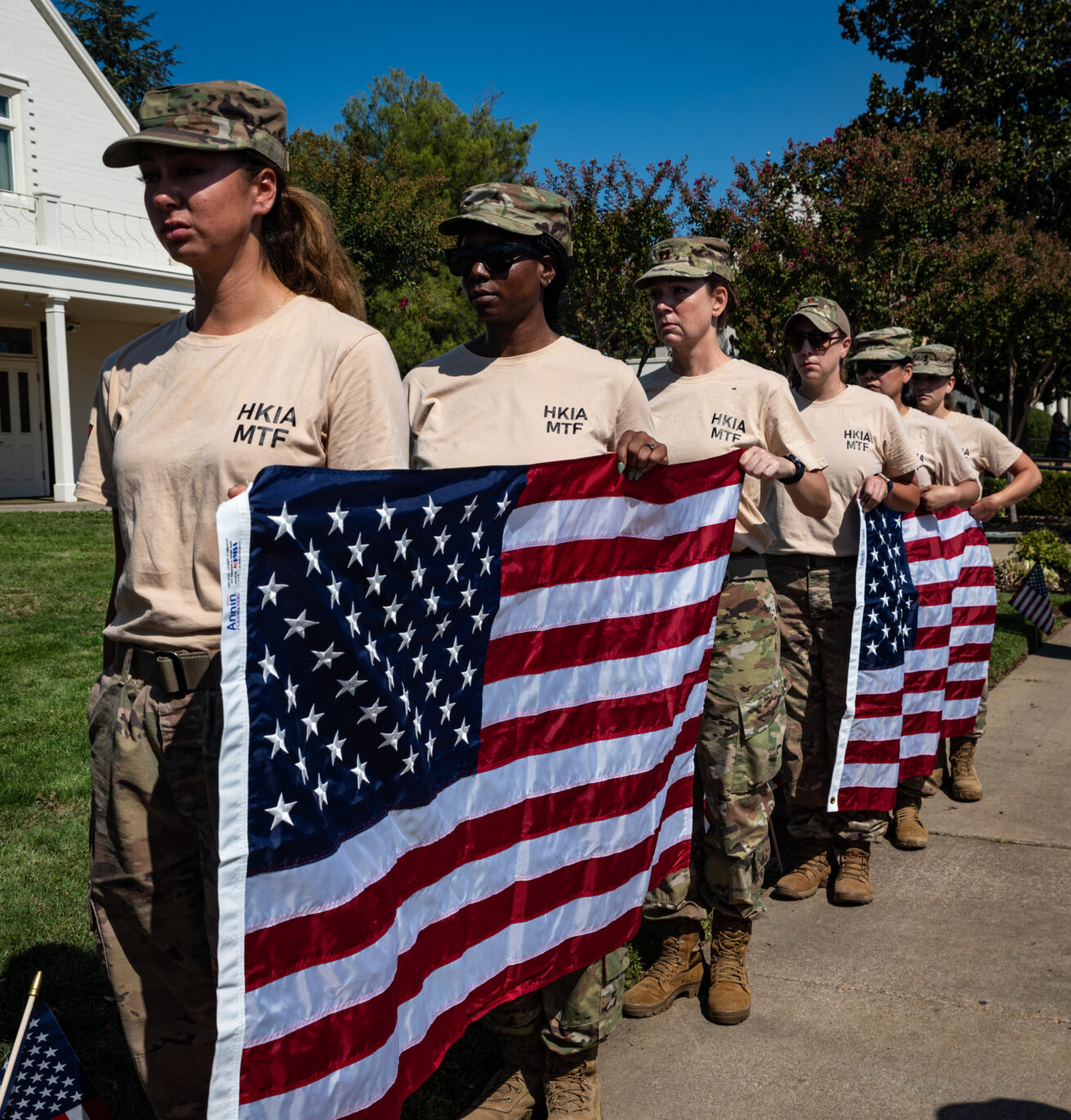 Today on my way home from my monthly Ag & Arts photo shoot in Yolo County, I noticed fire trucks on the overpasses near the airport. A mix of law enforcement and civilians were holding and waving flags, including red Marine Corps ones. When I saw a sign that mentioned Nicole Gee, I realized that the 23-year-old fallen Marine was coming home.

According to the City of Roseville, Gee was a 2016 Oakmont High School graduate who enlisted in the Marines a year after she graduated. She served as a maintenance technician with the 24th Marine Expeditionary Unit from Camp Lejeune in North Carolina. On August 26, while assisting in the evacuation effort, she was one of thirteen service members killed in the blast attack at the Kabul Airport in Afghanistan. The Sacramento Bee and all the other local media have covered Gee’s story extensively over the past few weeks and many details can be found online.

As I continued driving home along I-80, I learned that the public procession of her body would end at Mt. Vernon Cemetery in Fair Oaks. Since I could travel that way heading back to Auburn, I decided to drive to the cemetery to see the procession’s arrival.

Every single overpass was like the first ones – full of flags and fire trucks, police and citizens. Some of them were very full, others lightly so. But the procession, including Gee’s family members, would not go past a single overpass that did not have parts of the community looking down on them with love, respect and support as they passed.

There were numerous cars pulled off the side of the freeway at the Greenback offramp, which I took. Once on Greenback heading east, the south side of the street was lined with more flag-waving residents. Off and on, depending on the block, this continued all the way down to Mt. Vernon. Hundreds of people had gathered within hours of the announcement to line the road of the procession.

I found a neighborhood parking spot and joined the crowd across the street from Mt. Vernon. Just west of us on the street, two fire trucks had joined their ladders in an upside-down V with a huge American flag hanging down from them. A welcome breeze blew and a couple of firefighters climbed up to adjust it. You couldn’t get me up there, that’s for sure!

We waited for awhile, as people tracked the progress of the procession on their traffic apps.

A police patrolman on a motorcycle drove up, telling us they were ten minutes away. Then it was just past two o’clock and they were arriving.

At first, as far as we could see was a huge stream of motorcycles. Their riders wore all kinds of motorcycle club jackets, and they too often had U.S. flags waving from their bikes. There were hundreds of them, and for the next ten minutes they rode by, turning into Mt. Vernon and parking on the far side.

The hearse and family vehicles finally arrived. Firefighters saluted and residents put their hands over their hearts. Even with the large crowd, it was nearly silent.

I walked across the street, and took the image you see of the women wearing the HKIA MTF uniforms. From what I have found, Hamid Karzai International Airport (HKIA) Military Treatment Facility (MTF) is part of the NATO military base connected to the international airport in Kabul, Afghanistan.

The other images are pretty self-explanatory. Gee’s husband Jarod and other family members holding one another in their pain, the stoic Marine pallbearers carrying the casket into the funeral home, and the silent crowds of motorcycle riders and other residents. There were some sniffles, and a strong sense of grief over the tragedy of such a strong, passionate young life gone. The Afghanistan War has obviously left its mark on this country in a myriad of ways. Today felt like a very personal, human one.

All photos are copyright Chris Allan 2021 and cannot be used without my permission. Please contact me for usage rights. Thank you for reading my blog post “Sgt. Nicole Gee Public Procession”. To learn more about me and my work, please see my About page.

I was so excited that Jason Brown, who came out la

A bit of an adventure to get here, but I am all ch

Another reason to plan a day in Auburn for the upc

Here's the first minute of the great new promo vid

A fun and festive little event yesterday in downto

Before leaving the North Shuswap area, I visited t