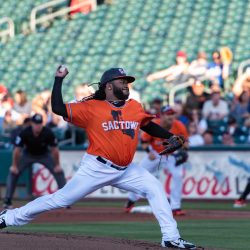 I had a great time on Friday, June 29, 2018 at the Sacramento River Cats Equality Night.  From the complimentary rainbow hand towels. to the carrying of the Pride/rainbow flag, to the Sacramento Gay Mens Chorus singing the National Anthem, it was a fun evening.  Not to mention the fact that San Francisco Giants pitcher Johnny Cueto pitched the first several innings as part of his rehab process, and helped the Cats shut out the Fresno Grizzlies 4-0.  Below is my gallery of photos, including Chase d'Arnaud, who was just chosen for the Giants to fill in for injured infielder Joe Panik.