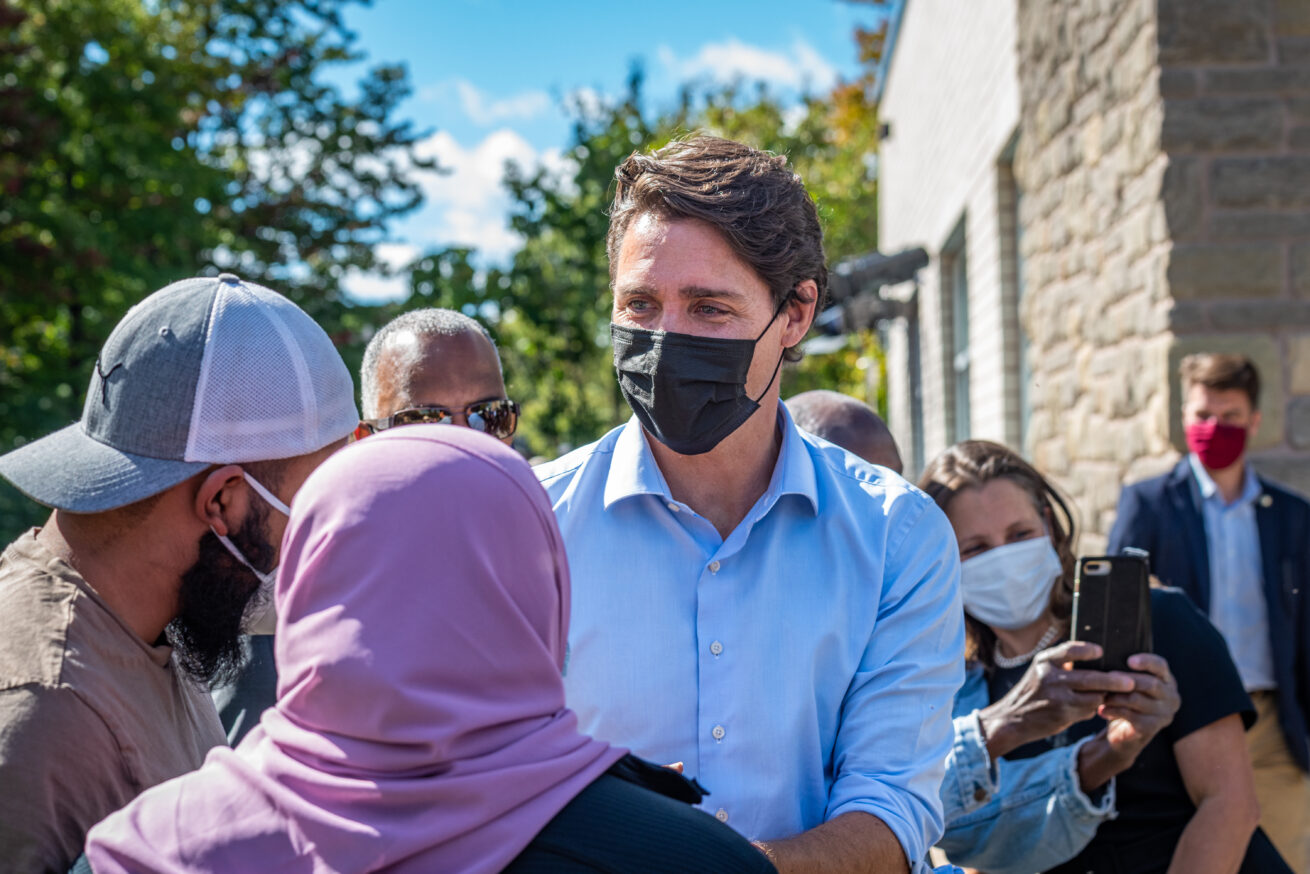 I had checked the PM’s official itinerary the day before and saw that there was an open media call at the Eva James Community Centre in Kanata. I wrote to the Press Secretary and the next morning we were on our way to Kanata.

The press corps waited, a much larger group than they had expected. After visiting the onsite COVID vaccination site, Trudeau was to hold a press conference and answer questions. Only a few members of the pool went inside to video and shoot stills. The rest of us waited outside, then took our places in the arbor area.

There had been no publicity about the event, so only the people who had come to get the shot knew about it. Some of them called friends and family on their cell phones. By the time the Prime Minister emerged, there was a small group of bystanders, possibly 20 or so.

With his signature rolled cuffs (a la Obama), Dockers and large belt, tall Trudeau strode briskly to the microphone. The much less tall Deputy Prime Minister Chrystia Freeland followed him . The press conference began and lasted about 30 minutes. Trudeau, a fluent French and English speaker, announced that he had told the Governor General (the queen’s official representative) that he was forming the government. He then spoke about a variety of issues, from five steps to return to normal, to COVID vaccinations to to the Huawei drama.

In both French and English, the press corps asked him questions ranging from gender parity among political representatives to how Trudeau saw himself again leading a minority government. (He won slightly less support than the second of the now three elections in which he has been the Liberal leader.) He insisted that he had a clear mandate, and also noted that “One of the fundamental responsibilities of any Canadian Prime Minister is to make sure that all Canadians see themselves represented in Canada.”

After the conference, Trudeau bumped elbows and took selfies with anyone who wished. My better half, a strong Trudeau supporter, demured at first, then jumped right in when he offered to do so with her.

Having covered two heads of state in two weeks, I had the following random observations of a few differences: 1) Lots of French was spoken, 2) Only male photographers/videographers were present except moi, 3) PM Trudeau took selfies with fans versus the protesters who showed up at Mather.

I must say however, that in both cases, getting access as a credentialed photojournalist was quick and painless. The power of the free press still seems to be taken very seriously in both nations, Dieu merci! 🇨🇦

All photos are copyright Chris Allan 2021 and cannot be used without my written permission. Please contact me for usage rights. Thank you for reading my blog post “Trudeau Visits Kanata.” To learn more about me and my work, please see my About page.

I was so excited that Jason Brown, who came out la

A bit of an adventure to get here, but I am all ch

Another reason to plan a day in Auburn for the upc

Here's the first minute of the great new promo vid

A fun and festive little event yesterday in downto

Before leaving the North Shuswap area, I visited t